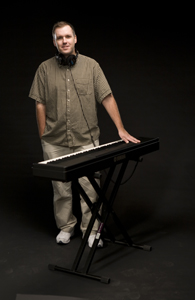 If Dan Pavelin hears voices where others don't, it would be no surprise. After all, as an audio designer and engineer, Pavelin's training keeps him well attuned to the slightest nuance of pitch, the faint stumble at the beginning of a sentence, the hesitant breath that leaves just enough room for an edit. With a master's touch, he makes hundreds of corporate and commercial projects sound better than they could in real time by working his digital magic.

An on-air personality as well as a composer (with an M.F.A. in Music, Composition and Technology emphasis), and a behind-the-scenes director, mixer and sound designer, Pavelin brings that same sensitivity to listening in the classroom. He teaches his students to hear what they never heard before and to find the power in sound that galvanizes or changes the shape of their film projects. But Pavelin also practices what he preaches, listening closely to the sounds of his students' interest—heading off boredom should it ever think to enter his classroom and putting real time to shame as his students are caught up in the sounds of Pavelin's magic.