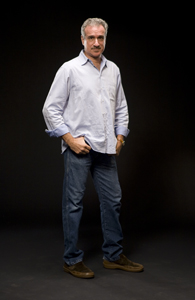 I Got the Disease

Growing up in Miami, Andrew Lane knew there was only one thing he ever wanted to do in life: Make movies. "I simply love telling stories — and all that that entails. Collaborating with others to create a singular vision. Putting a story up on the screen. Sitting in the audience, watching people actually enjoy something I created, or having them walk up to me on the street and comment on a film I made--it's a great feeling."

While studying mass communications at the University of Miami, Lane worked part time making educational and industrial movies, which served as his entrée into the Miami filmmaking community. Over the years, Lane has produced more than 25 feature films and movies for television, including Valley Girl, Night of the Comet and Jake Speed. He wrote part or all of most of those titles as well as having written for other producers and studios. Lane also directed numerous films including MGM's Mortal Passions (winner at Deauville and a Sundance competition entry), Lonely Hearts and original movies for CBS and Showtime.

Of filmmakers, Lane explains, "This is what we do. It's like we got the disease. We're stuck. While it's sometimes more pain than pleasure, there was nothing else I ever considered doing."