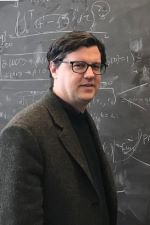 Dr. Jordan joined Chapman University in 2021 as co-Director of the Institute for Quantum Studies and Professor of Physics. He has been affiliated with the IQS since 2012 as an Affiliated Scholar.

He received the NSF CAREER award in 2009 and was named a Simons Fellow in theoretical physics for 2017.