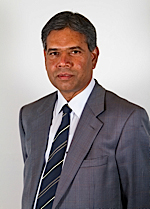 Dr. Aftab Ahmed earned his Ph.D. degree in protein chemistry from HEJ Research Institute of Chemistry, University of Karachi, Pakistan in 1989. He completed a part of his Ph.D. thesis at the Department of Protein Chemistry, Max-Plank Institute of Biochemistry, Munich, Germany. After graduation, he rejoined Max-Planck Institute in 1988 as a postdoctoral fellow and continued his research work on the primary structure of Carnivore hemoglobin. He joined National Cancer Institute (NCI), Frederick, Maryland as a postdoctoral fellow in 1989 and worked on the characterization of retroviral proteins from HTLV-1 and BLV retroviruses. He joined as postgraduate researcher to work on the characterization of human fibrinogen at University of California Irvine 1992, and later established a Biomedical Sequencing and Synthesis Core Facility. He also worked on peptide synthesis at Harbor UCLA Medical Center. Ahmed also has industrial experience, working in biotechnology companies. He joined as a protein chemist at CytoTherapeutics Inc., Lincoln, Rhode Island in 1996. Later he joined as a Staff Scientist, Biochemistry R&D in a tissue engineering company, Organogenesis Inc, Canton, Massachusetts in 1998. Ahmed moved to academia and joined as a Coordinator and established a multi-million dollar Centralized Research Core Facility at the University of Rhode Island (URI) in June 2003, supported through IDeA Network of Biomedical Research Excellence Program, NIH. He became a Research Assistant professor at URI in May 2008 and is involved in teaching graduate and undergraduate courses at URI. He also participates in undergraduate network institutions in the RI-INBRE program. He is currently an adjunct faculty member at the International Center for Chemical and Biological Sciences (ICCBS), University of Karachi, Pakistan. He is conducting collaborative research projects related to bioactive proteins and peptides from various spices used as folk medicine in Pakistan, as well as the characterization of hemoglobin from snake Leaf-Nosed Viper. Dr. Ahmed has authored 24 peer-reviewed publications and 15 meeting abstracts.

Dr. Ahmed’s research interests include protein purification, characterization, and amino acid sequencing. (1) Primary structure of hemoglobin to understand inter-species relationship at molecular level. (2) Proteins and peptides profiling of plants based in folk medicine from Pakistan. He is an author of 24 peer-reviewed publications, and 15 meeting abstracts.