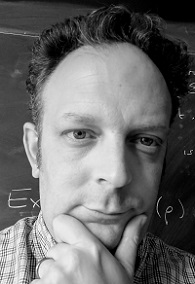 Assistant Professor, Program Director for the Faculty of Physics

I am interested in the quantum information theory and the foundations of quantum theory, and especially in topics at the intersection of the two areas.

I am an academic who straddles the line somewhere between mathematics, philosophy, and theoretical physics.  My main interests are in Quantum Information Theory and the Foundations of Quantum Theory.

Since January 2015, I have been an Assistant Professor of Physics at the Schmid College of Science and Technology at Chapman University, and a member of the Institute for Quantum Studies

I studied for my Ph.D. in the School of Mathematics at the  of Bristol(2000-2003) under the supervision of Prof. Noah Linden, where I was a member of the Quantum Computing Group.

After a brief stint as a research assistant at Bristol, I arrived at Perimeter Institute as a Postdoctoral Fellow in January 2004, where I worked until September 2006. From October 2006, I was a research associate in for Quantum Computation at the University of Cambridge for three months. In January 2007, I arrived back in Waterloo for a second postdoctoral position, in which I was affiliated with the Institute for Quantum Computing and the Department of Applied Math at the University of Waterloo, and with the Perimeter Institute. The latter was due to a research grant from Questions Institute.

For further information about me, take a look at my CV, or download the pdf version. You can also view my Google Scholar profile.