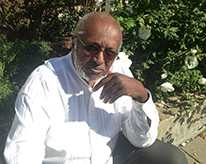 Born on Chicago's West Side, "Prexy" (Rozell W.) Nesbitt has spent more than five
decades as an educator, activist, and speaker on Africa, foreign policy, and
racism. Prexy's career has also included extensive consulting and training on class,
race, multiculturalism and diversity. A teacher and lecturer for many years all over
the USA, he additionally has worked as a "red cap," social worker, union organizer,
special assistant to Chicago’s Mayor, the late Harold Washington, and a senior
program officer with the MacArthur Foundation in Chicago. Over the course of his
career, Prexy has made more than one hundred trips to Africa, including trips
taken in secret to apartheid-torn South Africa. A product of the University College
of Dar Es Salaam and Antioch College, he was active in the USA, Canada and
Europe in the struggle to end apartheid and worked to end colonialism in Angola,
Mozambique, Zimbabwe (former Rhodesia) and Namibia (former Southwest
Africa). From 1979-1983, he worked worldwide as the Program Director of the
World Council of Churches Program to Combat Racism based out of Geneva,
Switzerland. In the late 80's he served as senior consultant to the Mozambique
Government organizing in North America to prevent the apartheid-backed rebel
movement, RENAMO, from gaining official support from the Reagan
administration and its allies.

Prexy has lectured and written widely, both in the United States and abroad,
publishing one book and articles in some twenty-five international journals. He was
interviewed in the 1993 documentary about police brutality in Chicago, "The End of
the Nightstick;" appears prominently in the 2014 documentary "Soft Vengeance" on
the life of South African High Court Justice, Albie Sachs, and also served as a cowriter
on the 1999 BBC/PBS production of The People's Century film series
segment, "Skin Deep," a documentary about racism in the United States and South
Africa.

For thirty-three years, he taught African history courses at Chicago's Columbia
College and took people on educational, cultural and political tours to various
'Third World' countries, regions and situations, both abroad and in the United
States. One recent trip, through the organization he founded, MAKING THE
ROAD, was to Brazil, Mozambique, Namibia and South Africa, June-August, 2013.
One of his most signal lifetime achievements, according to those who know him well,
is that he has had the honor of knowing and working for the late Dr. Martin Luther
King, Eduardo Mondlane, Samora Machel and Mayor Harold Washington,
Additionally, he has worked closely with Amilcar Cabral, Julius Nyerere, Nelson
Mandela, and Graca Machel.

Nesbitt, Prexy, co-edit, Nesbitt, George, Being Somebody and Black Besides, Univ of Chicago Press, Chgo, 2021. Minter and Nesbitt, "The Race-Class Narrative and Eroding the Racist Right: A Review of Merge Left by Ian Lopez, 2020. Nesbitt and Moorman,"the US and Anti-Colonial Resistance in Angola, The Dissenter, 22 June 2020. Nesbitt, appearance in documentary "Mandela Comes to Chicago,"WTTW